Every 60 seconds a child dies from malaria.

In addition to the loss of life, malaria puts a huge strain on healthcare systems, accounting for 40 percent of public health costs in some countries. In addition, malaria impacts productivity — leading to school and work absenteeism and relegating many to a life of poverty.

For poor people in countries where malaria is most prevalent, anti-malaria drugs are out of reach due to their high cost. As a result, insecticide-treated bed nets have been embraced as a cost-effective way to prevent malaria transmission. 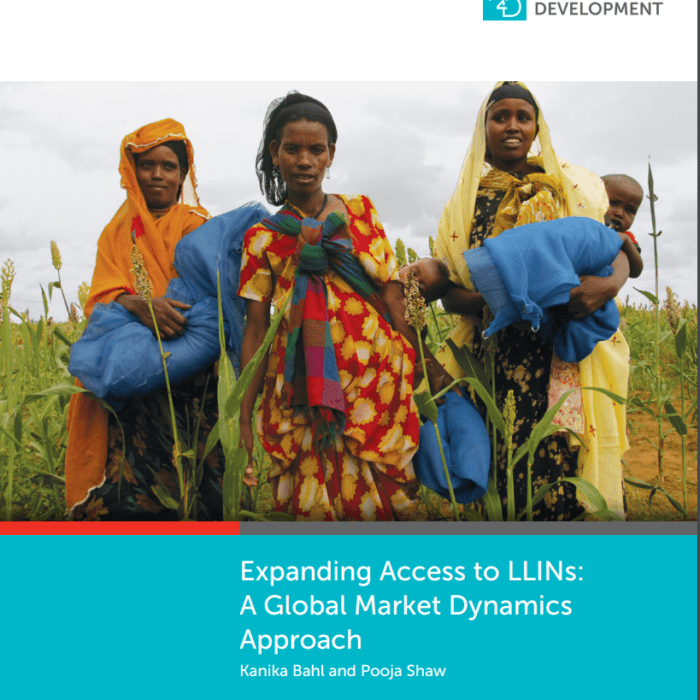 The global LLIN field is now at a vital turning point

In recent years, campaigns to distribute and encourage the use of long-lasting insecticide-treated bed nets (LLINs) has contributed to a 20% decline in malaria deaths. But these nets must be replaced approximately every three years — which has presented a significant financial hurdle for maintaining these gains.

By examining market drivers and barriers and by working with 140 actors including suppliers, countries, and global financiers and regulators, Results for Development was able to identify opportunities for greater efficiencies and value for money.

After conducting significant analysis, Results for Development provided specific recommendations to save the global community up to $630M, which could be used to purchase bed nets to protect 300M additional people, including:

This analysis was completed in 2012 and since then a number of changes have occurred within the LLIN marketplace that align with R4D’s recommendations. The biggest global purchaser of bed nets, the Global Fund, moved to improved procurement practices including framework agreements which are projected to save over $93M and allow for the purchase of over 40M more nets. In 2013 the Global Fund also moved to standardize net sizes, shapes, and colorswhich, in tandem with other efforts resulted in a projected $140M in savings. These and other efforts will collectively allow for hundreds of millions of additional children to have lifesaving coverage from these bed nets.

Results for Development’s work has received widespread attention and has been cited in the Guardian, the Huffington Post, WHO 2011 World Malaria Report and the Roll Back Malaria Resource Mobilization Strategy.