Washington, D.C. — April 17, 2016 — Results for Development, the World Bank and 1,000 Days unveiled a groundbreaking study outlining how much donors and governments need to invest in nutrition — along with financing scenarios that suggest how costs could be divided equitably among donors and governments — to drive significant progress toward achieving four of the six World Health Assembly Global Nutrition Targets, specifically those focused on alleviating stunted growth, wasting and anemia, and increasing exclusive breastfeeding.

Malnutrition is the underlying cause in nearly half of deaths of children under age five every year. In addition, millions more women and children bear the burden of poor health caused by malnutrition and the global economy loses billions of dollars due to lost productivity and health care costs. Yet these losses are almost entirely preventable. 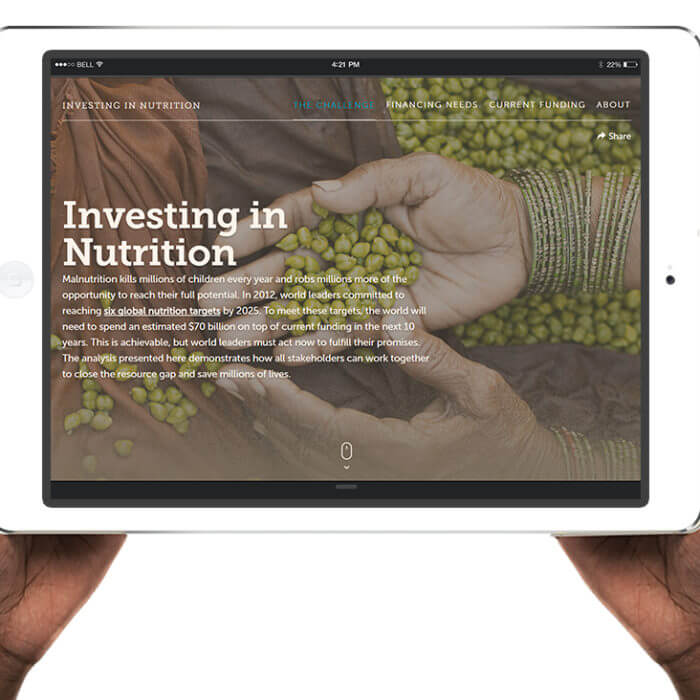 With just $3.9 billion currently invested and decades if under-investment, expanded action is urgently needed. An additional investment of $7 billion per year for the next 10 years could yield tremendous returns: 3.7 million child lives saved, at least 65 million fewer stunted children, and 265 million fewer women suffering from anemia in 2025 as compared to 2015.

To jump start progress, a smaller package of proven, cost-effective priority actions can be implemented immediately. Investing an additional $2.2 billion per year in nutrition over the next 10 years will help to save an estimated 2.2 million lives and result in 50 million fewer stunted children in 2025, empowering them to grow to their full physical and cognitive potential.

The analysis was presented at an event hosted by the World Bank with keynote speaker Bill Gates, co-chair of the Bill & Melinda Gates Foundation.

“An investment in nutrition can help make every other investment in health and development pay off,” said Gates. “And while progress is possible, it is not inevitable. With the release of today’s analysis by the World Bank and Results for Development, we know there are proven, cost-effective tools to combat malnutrition – such as food fortification and breastfeeding. Investments in these interventions will help ensure millions more children globally have the opportunity to survive and thrive.”

Results for Development’s analysis of the financing possibilities show that if country governments and donors work together in a coordinated fashion in the spirit of “Global Solidarity,” the extra funds for nutrition can be raised over the coming decade. To generate the additional $22 billion required for the priority package, countries with high malnutrition rates will have to raise nutrition-focused funding from 1% to about 1.6% over the next decade. And donors will need to boost the fraction of development aid dedicated to nutrition to just 1.3% by 2021.

“These increases in country and donor outlays will be challenging but they are achievable, if there is a strong national and global commitment to reducing malnutrition,” said former Results for Development Managing Director Robert Hecht. “When leaders see the huge health benefits and economic returns on these investments to stop stunting, wasting, and anemia in children and women, we think they will motivated to allocate the modest extra funds required to save millions of brains and lives”

Now, all eyes will be on the African Leaders for Nutrition event at the African Development Bank’s meeting in Lusaka in May and on the Nutrition for Growth Summit in Rio de Janeiro in August. The world’s leaders often tout fighting malnutrition as a priority, but now they have a roadmap for action. Will they heed it?