In April 2013, Results for Development Institute (R4D) reviewed the benefits of primary education and estimated the economic cost associated with large populations of out-of-school children in a background study for Educate A Child’s (EAC) High Level Strategic Meeting to Accelerate Efforts to Reach Out-of-School Children (Burnett, Guison-Dowdy and Thomas 2013). This report is an extension of that study. It updates economic cost estimates to reflect the latest data from the UNESCO Institute for Statistics (UIS), further develops the estimation methodology, and expands the estimation exercise to a set of 20 low- and middle-income countries.

EAC’s mission to support the Education for All initiative and Millennium Development Goals for education is more pressing and relevant than ever. Although significant progress toward achieving universal primary education has been made over the past decade, out-of-school children (OOSC) remain a pervasive global problem. According to UNESCO estimates, there are at least 57 million OOSC of primary-school age in the world (UIS 2013).

To underscore the importance of reducing the global number of out-of school children, this paper uses two methods to estimate the economic cost associated with OOSC. The first estimation approach uses labor market data to estimate the total earnings that will be forfeited in the near future due to undereducated workers if primary school enrollment patterns do not change. The second approach is based on cross-country regressions that estimate the relationship between national education attainment and per capita income (Psacharopoulos and Patrinos 2011, Barro and Lee 2010). 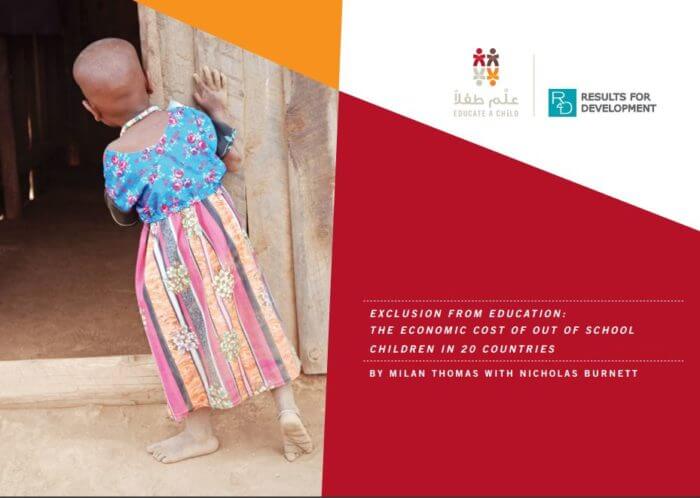