Funding for disease-specific interventions or programs have traditionally been channeled vertically, however with the growing recognition of the role of strong health systems to effectively implement these programs has caused many funders to explore how funding can be used to improve service delivery in weak health systems. In this paper we explore the importance of how funding for AIDS has helped to strengthen health systems in the past and the role it can play in the next 25 years in improving the delivery of interventions while simultaneously helping to improve overall system performance.

In September 2007, political leaders launched the International Health Partnership (IHP+) to promote health systems strengthening in low- and middle-income countries. Eight countries agreed to develop and sign ‘compacts’ with donors to assure that all money available for health systems is used as effectively as possible. This change marks a new ‘diagonal’ architecture of health systems. Work on IHP+ has continued since its founding and now includes at least eight additional countries.

In the past eighteen months, the number of IHP+ recipient countries has grown to 16, and the number of international agencies (11) and bilateral donors (12) has also increased. IHP+ offers the chance to progress beyond the sterile vertical v. horizontal debate over health funding approaches in favor of diagonal efforts to achieve the health MDGs as well as universal access for HIV/AIDS programs. In this paper, the diagonal comprehensive approach to health interventions will be explored using the compact countries to illustrate how HIV/AIDS funding is benefiting the health system as a whole. Donors for HIV/AIDS health systems are already working in this new direction. The Global Fund and PEPFAR are devoting at least one third of their grants to the objectives of health systems strengthening (HSS). PEPFAR, now the largest donor for HIV/AIDS programs, is cooperating closely with the IHP+ initiative and obligated USD638 million in 2007 to HSS as part of its AIDS work. The Global Fund Round 9 proposals due 1 June 2009 focus on HSS. Multilateral institutions, including the World Bank and the regional development banks, are supporting HSS within the context of sector-wide approaches to country lending. 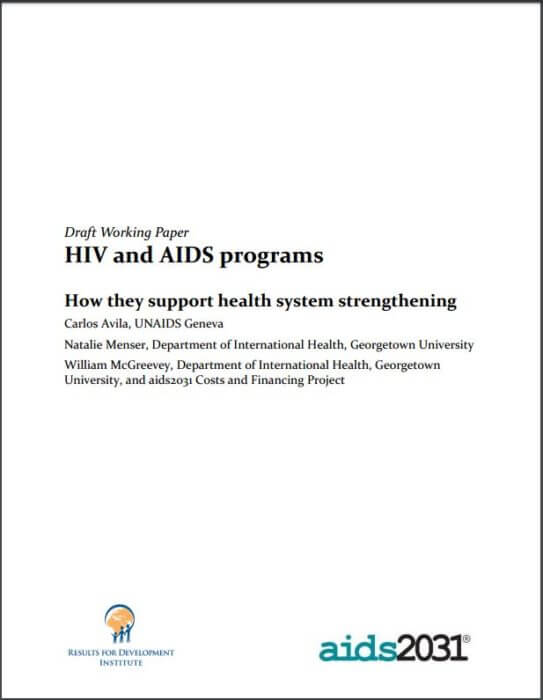