The paper develops a framework for designing and implementing healthcare delivery innovations aimed at making health markets work better for poor people. Focusing on the social contract between providers and users, it reviews several arrangements that have emerged, with a particular focus on the providers largely used by the poor.

During the past two decades, there has been a dramatic spread of market relationships in the health sector of many low- and middle-income countries (Mackintosh and Koivusalo 2005). Typically, out-of-pocket payments account for a substantial proportion of total health expenditure, and a large share of health care transactions include some form of cash payment (National Health Accounts 2007). Many countries have pluralistic health systems in which providers of health-related goods and services vary widely, in terms of their practice settings, their type of knowledge and associated training, and their relationship with the legal system (Bloom and Standing 2001).

The policies of some international organizations in supporting strict limits to government expenditure and advocating an increased role for markets in health systems have had some influence. But this phenomenon is more generally associated with the rapid spread of market relationships in many sectors. In some cases, its emergence is linked to failures of state provision of services to meet popular expectations. In other cases, it is associated with a rapid spread of markets with economic growth. The spread of markets has often been much faster than the capacity of the state and other key actors to establish regulatory arrangements to influence their performance. A large proportion of market transactions now take place outside any national legal regulatory framework or in settings where regulatory regimes are poorly implemented or lack clarity. A common feature is the blurring of boundaries between public and private sectors, with staff moving across these boundaries, often informally and sometimes in the course of one day, and users making informal payments for services or drugs at public facilities, or consulting government health workers “privately.” 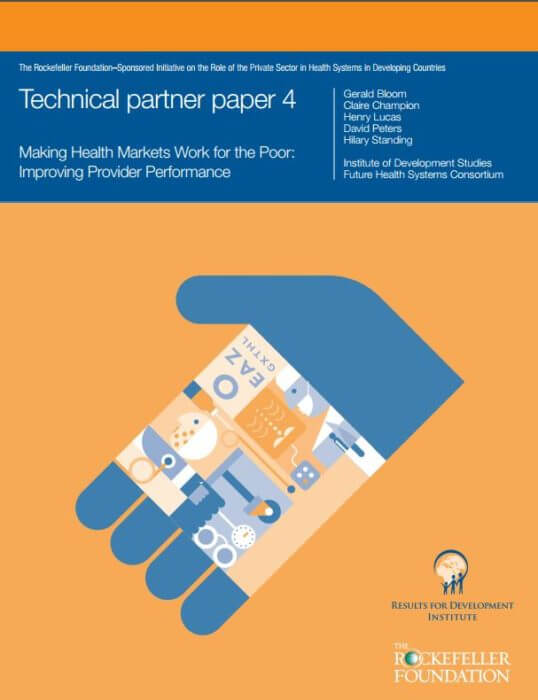