The paper presents a comparative analysis of the two most recent waves of Demographic and Health Survey data, with a focus on the private-public mix in provision of care to women in reproductive ages and children. Overall findings reveal a wide variation in the role of informal private, formal private, and public sector actors.

Achieving the Millennium Development Goals for maternal and child health (Goals 4 and 5) still poses a great challenge for several low-income countries. An analysis of the most recent (2001–2006) Demographic and Health Surveys (DHS) and an adjacent prior wave (1995–2000) reveals a wide variation in the role of the private sector in health care for women of reproductive ages and children under five in 19 low-income countries in subSaharan Africa and 6 low-income countries in South and Southeast Asia. Health providers or facilities sought by women in nationally representative households for four care tracers—modern contraception, birth delivery, and treatment of child diarrhea and child fever and cough—were grouped hierarchically into three major sources: the informal, formal private, and public sectors.

The private sector provided more than 50 percent of family planning services in 8 of the 19 low-income countries in sub-Saharan Africa and in 2 of the 6 countries in South and Southeast Asia, mostly through formal private providers or facilities. The private sector—especially informal providers—was even more dominant in delivery. However, in Vietnam (2002), the public sector dominated these health markets for women. The informal sector strongly prevailed in family planning in Cameroon (2004) and in delivery care in Ethiopia (2005) and Bangladesh (2004), while in Indonesia (2002) the formal private sector provided the greatest share of both family planning and delivery care. The informal sector was most prevalent for the treatment of child diarrhea and child fever and cough, particularly in Chad (2004) and Mali (2001). In Vietnam, Nepal (2006), and Uganda (2006), the informal sector played a minimal role in the treatment of diarrhea and of fever and cough, while in Mozambique (2003) treatment by the public sector dominated. Treatment of these two diseases by the formal private sector predominated in India (2005).

A comparison of two DHS waves (five to six years apart) shed light on an expanding (or shrinking) trend in this private-public mix in women’s and children’s health care for some countries. For observable urban-rural and rich-poor gaps, the formal private sector typically tended to prevail in the health care for urban or wealthier populations more than for their rural or poorer counterparts. For family planning services, rural or poorer subgroups in most countries relied heavily on the public sector (except in Mozambique and Mali). Ironically, the public sector was found to be more prevalent in the care for the better-off in delivery care in all countries. This analysis of DHS data found mixed results in the urban-rural and rich-poor gaps in the treatment of children. Chad and Mali were the two low-income countries showing a consistent pattern of both the formal private and public sectors figuring more prominently in the care for the better-off, while Vietnam was an example of low-income countries where the worse-off depended largely on the public sector for treatment of both illnesses. 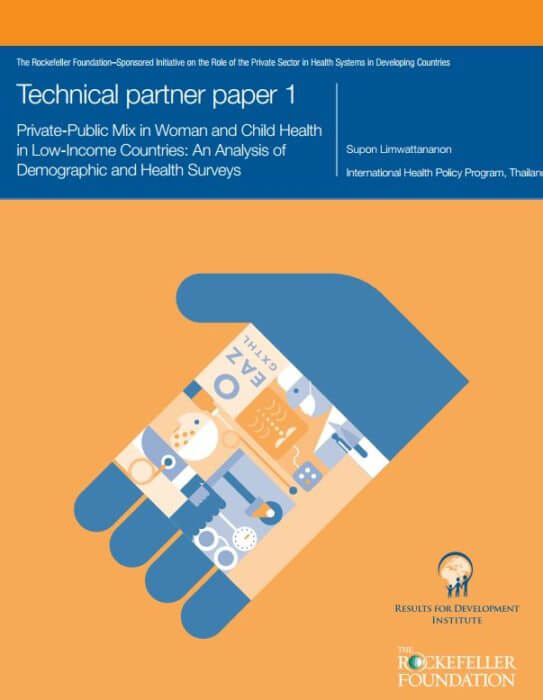