[Editor’s Note: This is the first post in a series documenting how the COMVID COVID-19 social movement quickly gained traction and government support in Burkina Faso. The movement was created by Réseau Accès aux Médicaments Essentiels (RAME), a Burkinabé civil society organization, relying on the Health Democracy and Citizen Involvement Platform and with the support of the African Collaborative for Health Financing Solutions (ACS), a USAID initiative led by R4D. This post focuses on the role of Citizen Health Watch units, which explore the movement’s transition from COVID-19 to universal health coverage (UHC). The Q&A will also unpack how the main pillars of the COMVID COVID-19 social movement is setting the stage for UHC in the country.]

Burkina Faso has a long history of active and powerful civil society organizations (CSOs). These organizations have been at the heart of most, if not all, of the important socio-economic and political events of the country’s history since gaining independence from France in 1960. CSOs established themselves as the guardrails guiding the governments’ efforts to lead the country to socio-economic and political stability.

To this day, Burkina Faso’s civil society is still heavily involved in holding the national government accountable to its constituents — including on its COVID-19 response. The country registered its first case on March 9, 2020, and the Burkinabé government was reported to have underestimated the threat it posed. Schools and universities were still open, borders were not closed, worship places remained functional, no curfews were established and heavily impacted areas were not quarantined.

In response, CSOs of the DES-ICI platform mobilized and published a press release on March 18 calling on the government to take preventive measures against COVID-19. According to RAME, this press release certainly had an impact at the government level because on March 20, during the president’s first speech, most of the CSO recommendations had been taken into account.

This blog is the first of a series documenting how the African Collaborative for Health Financing Solutions (ACS), in partnership with Réseau Accès aux Médicaments Essentiels (RAME), a Burkinabé CSO, supported the creation of the COMVID COVID-19 social movement (loosely translated as “Communities combat COVID-19”) to fight COVID-19 as well as the coalition’s march toward universal health coverage (UHC) in Burkina Faso.

Prior to the COVID-19 pandemic, ACS and RAME were collaborating to create a social movement to support UHC in Burkina Faso. However, the pandemic prompted RAME to shift its action plan to respond to the observed lack of adequate community engagement in mitigation measures to combat COVID-19.

With the ACS team in agreement on the plan, RAME, relying on The Health Democracy and Citizen Involvement Platform (DES-ICI) , quickly mobilized national CSOs around the cause and created the COMVID COVID social movement.

The COMVID COVID-19 social movement is a grassroots movement initiated and piloted by national CSOs that are motivated by the desire to improve the wellbeing of Burkina Faso residents. The Health Democracy and Citizen Involvement Platform (DES-ICI) acts as its secretariat and oversees the different Citizen Health Watch Units (CHWUs) that are mandated to carry out the movement’s activities in each city’s districts. The structure of CHWUs is shown in Figure 1. It is, however, important to note that all the 15 positions in each CHWU are filled by volunteers. 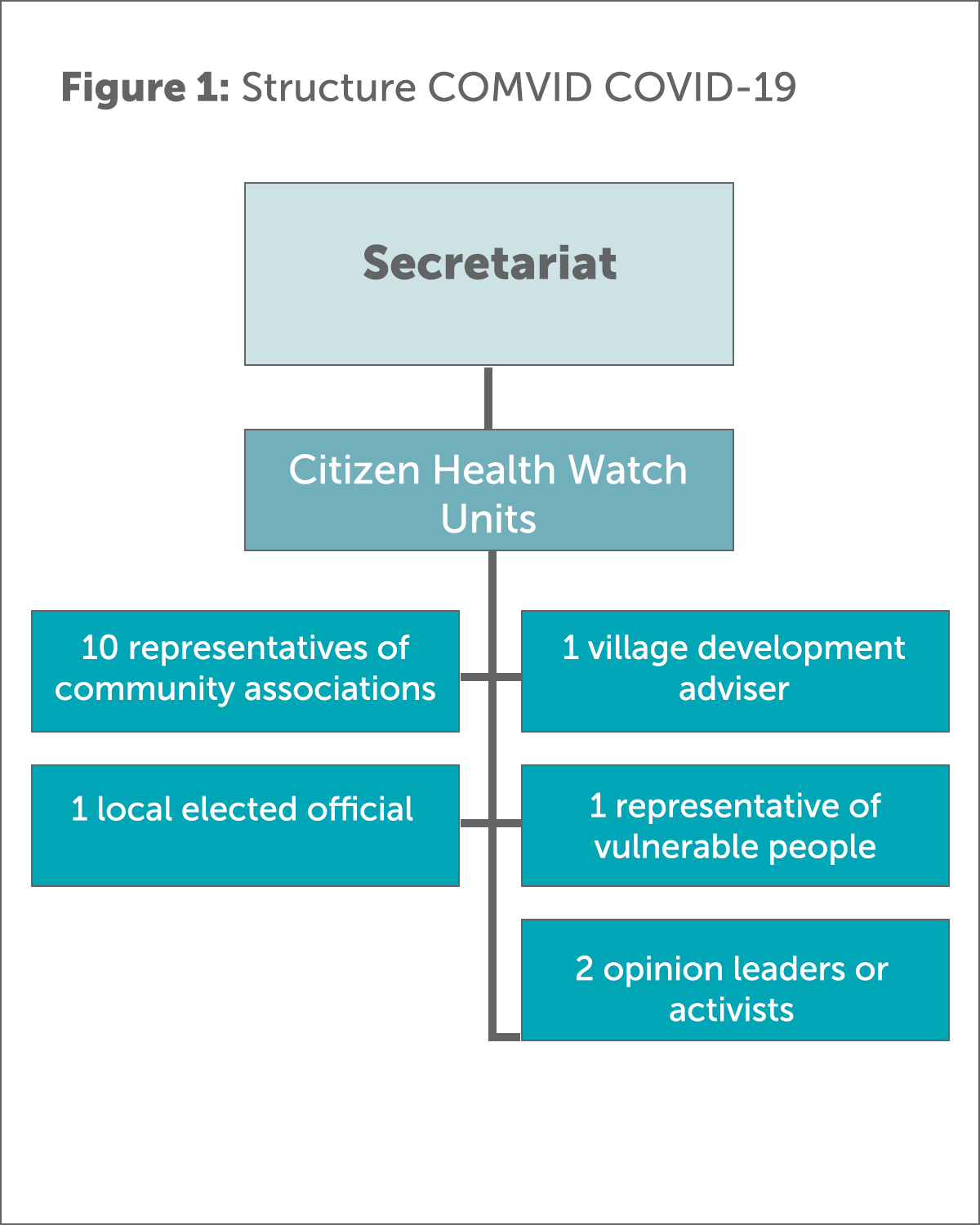 Ouagadougou, the country’s capital city and the epicenter of the virus outbreak, was the first city where the movement decided to take action. RAME launched a call for CSO applications, resulting in nearly 200 submissions from Ouagadougou-based CSOs.

The social movement established a CHWU in 51 of the 55 districts of Ouagadougou. Simultaneously, ACS mobilized a regional learning platform comprising ACS and non-ACS countries as well as other regional resources, such as The Force, to exchange learnings and successful approaches implemented in other countries against COVID-19. During these collaborations, the example of South Korea’s COVID-19 response was highlighted — and inspired the COMVID COVID-19 movement to pressure on the government to: 1) organize mass-testing campaigns in heavily impacted areas of the city,  and 2) impose a mask-wearing mandate in public places, and 3) establish a curfew to flatten the curve.

With ACS’s catalytic support, the social movement was able to quickly gain traction as well as a positive response from the government in implementing the CSOs’ recommendations. In addition to prevention efforts, the social movement also focused on: monitoring access to health services, monitoring resources allocated to the COVID-19 response, and analyzing the governance of health services.

One of the reasons for COMVID COVID-19’s success is it created a flexible mechanism to ensure accurate information was shared with the Ouagadougou community through trusted platforms that were known to be effective.

In other words, it uses a harmonized approach to determine what needs to be done at the central level, but each CHWU is given the agency to decide on the specific adaptations to use to attain the sought-out objectives, where applicable. For example, when it comes to sensitizing citizens to mitigation measures against the virus, each CHWU has the choice to either conduct house visits to share information, facilitate radio shows or host discussions in places of worship, among many others or a combination of those options based on what citizens within their district are receptive to.

The collaborative and inclusive nature of the social movement sets the stage for the reinforcement of accountability mechanisms within the movement as well as in the Burkinabé health system. The first step of accountability requires having information about the actions of those in charge as well as their promised deliverables. When all stakeholders are aware of what they can expect of those in power, they are better able to compare the expected outputs to the actual results and demand explanations for the differences, if any. The structure of the movement also enables all voices in the Burkinabé society to be heard via their representatives. The representatives, in turn, inform constituents of the progress made and serves as a bridge between the government and citizens. Each of these “information steps” is necessary for any accountability mechanisms to be effective and efficient.

The importance of sharing learnings along the way

It is from that perspective that DES-ICI, the social movement’s secretariat, conducted a joint workshop where the strengths and weaknesses of the movement were analyzed, and potential mitigation measures identified. In addition to evaluating its progress towards its objectives, they created a plan to identify its most salient learnings to be shared with other units to expand beyond Ouagadougou.

Seeing the social movement’s success in Ouagadougou, the DES-ICI platform decided to extend the social movement to all regions of Burkina Faso starting with Bobo Dioulasso. Additionally, the movement received funding from the Ministry of Health, as part of a project that concerns these two cities. The project consists of producing masks and soap for the vulnerable households in the outlying districts of these two cities. To contribute to the CHWUs, the social movement has decided to transfer the production of soaps to these CHWUs and  kept the production of masks for reasons of compliance with the standards set by the Ministry of Health.

As the movement expands into new cities, ACS is simultaneously documenting the social movement’s experience in Ouagadougou through RESADE, another institutional partner of ACS in Burkina Faso, to benefit both national stakeholders as well as other countries across Sub-Saharan Africa.

Looking ahead, the movement will use similar joint workshops to discuss how COMVID COVID-19 can eventually transition from combatting COVID-19 to focusing more on a UHC-focused agenda to better prepare the country for potential upcoming public health crises and more.

Catch up on the series:

About ACS
The African Collaborative for Health Financing Solutions (ACS) is a five-year, USAID-funded project that supports countries to advance toward universal health coverage (UHC) in sub-Saharan Africa. Learn more on the ACS web page.

This publication is made possible by the generous support of the American people through the United States Agency for International Development (USAID). The contents are the responsibility of Results for Development, Duke University Global Health Innovation Center, Amref, Synergos, RESADE, and Feed the Children and do not necessarily reflect the views of USAID or the United States Government