From 2013 to 2018, the Transparency for Development Initiative — a joint effort of the Ash Center at the Harvard Kennedy School and Results for Development — evaluated the effectiveness of a transparency and participation program that sought to improve maternal, newborn, and child health. As part of a forthcoming “Bright Spots” blog series, we are exploring the wealth of qualitative information we collected to dig deeper into the specific, community-level and individual stories behind the evaluation results. This information also valuably allows us to reflect on our program through a gender lens. In this post, we look at participation rates and motivations; in an upcoming companion piece, we look at how that participation translated into empowerment.

Now, women have changed to development fighters.”­ —A program facilitator in Tanzania

At first I was so shy to talk to others, but now I am confident enough to share my opinion.” —A 32-year-old female community representative in Indonesia

To be clear, we did not design the Transparency for Development (T4D) project with an explicit focus on gender — nor did we select the outcome of interest (improving maternal, newborn and child health) because it is an outcome that may have special resonance with women. We did deliberately seek to achieve, among other outcomes, citizen empowerment — not only empowerment of women. 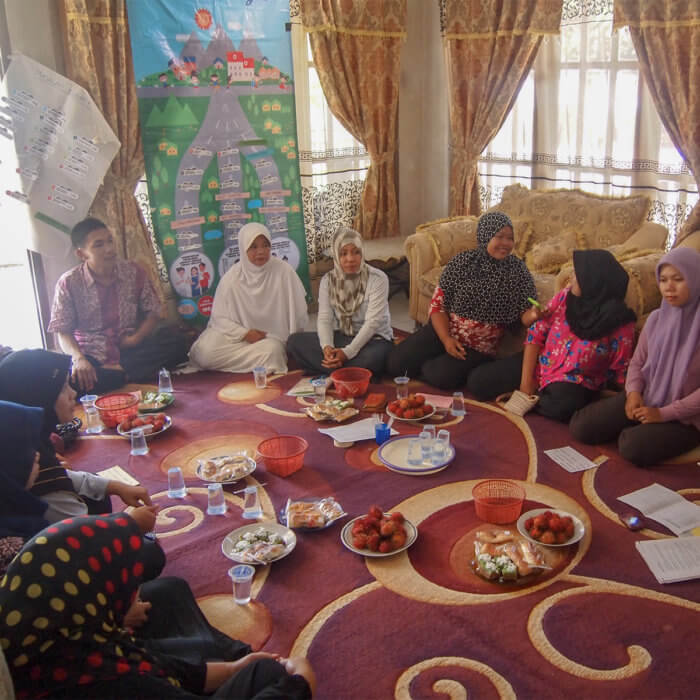 In this post on the Transparency for Development project, we explore whether and how participation translated into empowerment.

But while analyzing the results of the intervention, gender-related questions began to surface. This isn’t necessarily surprising, since the power dynamics underlying transparency and participation work have very obvious gender considerations. Ahead of the Open Government Partnership Summit next week, which will focus on inclusion and where T4D will be presenting our results alongside similar work from World Vision, we wanted to share some of the findings from our analysis.

Did women participate in community mobilization for social action on maternal health?

The instructions for forming community representative groups tried to be “gender accommodating.” Facilitators were asked to recruit participants with a balance of genders and leadership experiences, and for social action planning, the manuals included reminders about facilitating discussions in a way to promote women’s ability to speak up and men’s ability to reflect on a health topic they might not see as personally immediate.

Because community representatives were free to join, continue, or leave the intervention at will, we do not have an exact count of the number of men and women who participated in the entire intervention. However, two years after the intervention, researchers held focus group discussions with the participants in all 200 communities that do allow some estimations.

How did gender dynamics affect who participated?

In Indonesia, we were able to quantify facilitators’ reflections from 40 villages on which participants were the most active. Eighteen reported that women were the most active, usually specifically using the term “housewives”. Twenty-one facilitators did not notice any gender difference. Only one village reported a predominance of men, and in fact, many facilitators reported significant challenges recruiting enough men at all for the group due to a lack of interest and many men in the community working on other islands. One facilitator said of his village, “the gender balance cannot be fulfilled, so I had to choose two men and 13 women.  The representatives who often come to meetings are female, young, more educated, and active in PKK or Posyandu.” Another male facilitator’s experience was similar: “At first, I wanted to balance male and female community representatives, but it is ok for all the representatives to be female, they are active and have spare time.”

This last experience might represent a way in which our hands-off intervention was unintentionally “gender exploitative,” where the representatives and actions might have taken advantage of existing gender inequities. In Tanzania, where men participated in higher numbers, some actions resulted in quotes like this one from a middle-aged male representative: “pregnant women have become aware…[that] when health attendants lash out at them, it is because of their own mistakes.” Additionally, since we did not compensate any of the community representatives in Indonesia, women might have felt more pressure to participate since their unpaid labor in the home was perceived as “spare time.” We did collect some qualitative data on why representatives joined the program, and indeed more respondents mentioned having free time or feeling “told” to join in Indonesia than in Tanzania, even though a sense of altruism was by far the dominant motivation in both countries.

For Tanzania, another interesting gender dynamic emerged when we asked some of the facilitators to reflect on which participants were most active. In her two villages, one female facilitator repeatedly criticized “lazy women” and “customs and taboos that men can do anything,” and said that women were “weak.” Another female facilitator also reported that “prominent old men” attended more of the meetings, due to “traditional and cultural beliefs” and “being men.” A third agreed that “cultural beliefs that women are not supposed to talk before men” suppressed participation from women.  Of course, we cannot draw any generalizations from this, but interviews of the male facilitators were noticeably less critical. One facilitator noted “a slight gender difference,” saying many of the discussions directly affected women the most.  In another of his villages, he similarly reported “elderly women especially” were the dominant community representatives.  The second male facilitator agreed that “females participated more,” while the third male facilitator did not recall any demographic differences in participation.

How much does it matter to have women in positions of power?

This is a hard question to answer because formal female leaders were uncommon in the treatment villages; only two of the T4D intervention villages had female leaders, both in Indonesia.  As such, we can only consider these villages as individual cases and not draw anything conclusive from these.  This is especially true because the results we observed in these two villages were mixed; the first village performed below average, while the second performed above average.

Also in Indonesia, some community representatives chose to designate a “coordinator” of their group.  Of these coordinators, 12 were female and 8 were male. There was no clear difference on rates of action completion or success.

At the same time, there were some clear effects on empowerment for the women who participated, whether or not they had a leadership role. And women and their male allies in the representative groups undertook some actions to shift the gender power balance in the broader community. Those topics, and more, are covered in the next blog, so stay tuned!