[Editor’s Note: This is part of a series of blogs sharing insights from the results of a review conducted by Results for Development of the first three years of the innovationXchange (iXc) unit within the Australian Government Department of Foreign Affairs & Trade (DFAT). This blog explores the theme of scaling innovation, while others in this series look at the emerging concept of innovation ecosystems, partnerships, and building a culture of innovation.] 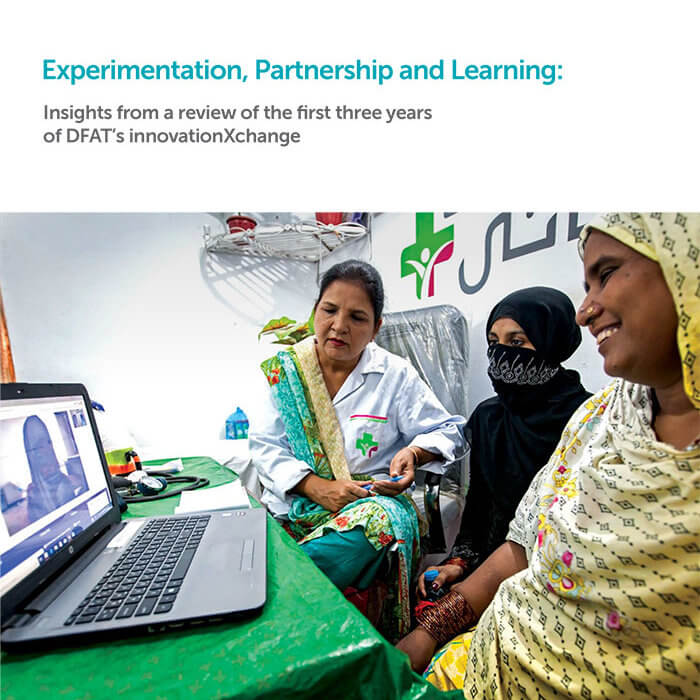 An analysis of the Australia’s Department of Foreign Affairs and Trade's (DFAT) innovationXchange (iXc).

In the field of international development, innovation is a means to an end, and the end we are all working toward is impact at scale. Although what that “scale”actually looks like in terms of depth, breadth or sustainability of impact differs across different actors and kinds of innovations, scaling is typically a long and difficult process requiring considerable time and resources. Coming up with a new idea or solution to a development issue is often the easy part — working out how to build a scalable business model, introduce and adapt it for different markets/populations and promote long-term, sustainable uptake are the real challenges. Most significantly, the evidence base on scaling innovation is still relatively immature, so there is no clear blueprint or roadmap to follow for success.

In 2015, in order to help tackle this challenge, the Australian Department of Foreign Affairs and Trade (DFAT) established a new unit, the InnovationXchange (iXc), to explore both the needs of innovators looking to take promising ideas to scale and the contribution that a development agency like DFAT might make in helping them get there. Keen to learn from and collaborate with other innovation units within bilateral, multilateral and private foundations, the iXc also became a founding member of the International Development Innovation Alliance (IDIA), which has the shared objective of developing “common platforms for supporting innovation from idea to scale” at the heart of its mission. Results for Development (R4D) has served as the secretariat for IDIA since it was founded.

The iXc’s strategic direction was shaped through consultation with a variety of actors and built around the three pillars of: experiment, partner and learn. This approach enabled the iXc to gradually build its understanding of the different types of innovation out there, and the different needs of entrepreneurs as they sought to progress their ideas along the six stages of scaling innovation (as defined by IDIA).

How the iXC helps innovations along the scaling pathway

To broaden its understanding around scaling needs and opportunities, the iXc intentionally spread its portfolio across a wide range of innovations, targeting almost every one of the Sustainable Development Goals (SDGs). An analysis of the portfolio in 2017-2018 indicated a strong emphasis on SDG 3 (good health & wellbeing),  SDG 4 (quality education) and SDG 2 (zero hunger), as well as SDGs that are typically less well-served by other actors. This included SDG 14 (life under water) for which the iXc ran initiatives such as the Coral Reef Innovation Facility, the Blue Economy Challenge and the Water Innovation Engine. The iXc was also able to attract investment usually focused on other geographic areas (e.g., Africa) to some of Australia’s priority countries and regions. By mid-2018, 13 countries (Bangladesh, Cambodia, Fiji, Myanmar, Nepal, Pakistan, Papua New Guinea, the Philippines, Samoa, Solomon Islands, Timor-Leste, Vanuatu, Vietnam) across the Indo-Pacific region were operating at least five iXc-funded programs, including those delivered through the Global Innovation Fund. This approach enabled the iXc to develop a broad base of “top-down” global learning and best practices drawn from international partners, and “bottom-up” empirical insights arising from its own portfolio of innovations being tested in the Asia-Pacific region.

iXc projects according to the primary SDG that they are addressing

Along the way, the iXc has helped many entrepreneurs successfully progress further along the scaling pathway. In fact, for those programs where data exists, 26% had advanced at least one stage along the scaling pathway in the first year of receiving support from the iXc. Examples from the iXC’s grant portfolio include the World Mosquito Program, which transitioned from “proof of concept” to “transition to scale” in 2017–2018, while the Data for Health and EnerGaia initiatives both progressed from “proof of concept” to “scaling.” There are fewer examples of the iXc’s direct support (e.g., mentoring and technical advisory services) helping an innovation reach scale, with the notable exception of the ADA-funded Tupaia program, which moved from “transition to scale” to “scaling.” This is to be expected given the focus on supporting early stage innovations and the fact that the majority of programs were added to the iXc’s portfolio in 2017–2018, while more time is typically required to see impact.

Today, the iXc continues to support a range of entrepreneurs at different stages of the scaling process. Some of these have had significant boosts along their pathways to scale. Beyond The Stars, an edutainment storytelling experience that empowers school children to rediscover local food through Virtual Reality, has now been included in the National Digital Education Curriculum by the Government of Fiji. Others, such as the researchers behind the Smart Food initiative, benefited from increased profiling through the LAUNCH Food challenge and established an AUD $2 million endowment which will afford critical institutional and financial stability in their journey along the pathway to scale.

Although it is still early days for many iXc-supported innovations, the development impacts are beginning to show.

In Vietnam, the iXc invested AUD $2 million in a water initiative that has seen piped water connections to nearly 6,157  households by four private sector operators. These operators have also contributed over AUD $1.7 million, with government co-financing of $341,200. Building on these successes, the implementing NGO, East Meets West Foundation, will be expanding some components of this water initiative to Laos (funded by the Korean International Cooperation Agency) in the second half of 2019.

Another example is Tupaia — a project that aims to map and  improve access to medical supply information across the Asia-Pacific region. Tupaia received a grant of AUD $2 million from the iXc to develop and test its platform and since then has improved the availability of medicines for a number of  communities. For example, since July 2017 when data from the Solomon Islands was first presented on the Tupaia platform, medicine availability has increased by nearly 20% — from 69% to 88% in April 2019. The platform was also instrumental in helping target and accelerate the repair of vital power and water supplies following Cyclone Gita that hit Tonga in February 2018. A team from R4D continues to work alongside Tupaia to help test and refine its model in support of its continued scaling.

Under the 2018-2021 Innovation Strategy released by DFAT, there is renewed commitment to both supporting innovations along their pathways to scale and a wider objective of scaling innovation support across all of DFAT. Though many innovations within its current portfolio are still at too early a stage to assess impact, early results show promise. And, as part of our learning partnership with the iXc, R4D has helped the team develop a system of metrics to track success over the coming years. In the meantime, the iXc will no doubt continue to find ways to punch above its weight and overcome the limitations of a small team and relative geographical isolation to help DFAT further strengthen its place as an important innovation player on the global stage.

DISCLAIMER: This 4-part blog series is based on a report funded by the iXc. The report is one activity under a broader strategic partnership between R4D and iXc. As a learning partner, R4D aimed to help the iXc reflect on their work and adapt their approach moving forward to achieve their intended impact. It was never intended, designed nor positioned as an evaluation. These findings and recommendations were intended for an iXc audience, but made public in the interest of full transparency — and in the spirit of supporting other innovation labs working on similar issues.