Improving the distribution and use of mining revenue will require a strategy that involves cooperation between different levels of government, the mining companies in each area, and civil society.“

Going beyond the recent election debate

Peru is still experiencing the effects of a highly polarized run-off presidential election where the generation, distribution, and use of mining revenue rose to the center of the debate.

Mining remains a central economic activity in Peru, representing about 10% of the country’s GDP and 60% of its exports. The sector currently accounts for roughly 210,000 direct jobs, with each direct job generating up to eight indirect ones, according to the Ministry of Energy and Mines (MINEM). It is likely that mining’s importance in Peru’s economy will continue. For example, the country is the second world producer of copper and zinc, and a vast deposit of hard rock lithium was recently discovered there — all  important minerals for an energy transition.

However, mining was not at the forefront of the recent electoral campaign until the first election round in April, when Pedro Castillo — a schoolteacher from the mining-rich and conflict-prone region of Cajamarca — became the surprising winner. Mr. Castillo, who did not appear on the radar of any national polls two weeks before the election, won in virtually every single mining region in Peru (and 88% of districts with active mining-related conflicts).

Castillo’s plan included the renegotiation of mining contracts, an increase in company taxes, and potential nationalization of mines. He argued that the current system perpetuated an unfair status quo that failed to translate into community development, damaged the environment, and was prone to corruption.

The first-round electoral results prompted a swift response from Castillo’s contender in the run-off election. Mrs. Keiko Fujimori, who currently faces a judicial process on several corruption counts, proposed that 40% of mining revenue available to regions be transformed into a direct household transfer to Peruvian citizens of mining areas.

Direct transfers of extractive revenue have received significant attention over the last decade. The background info below discusses recent experiences with such programs.

Recent evidence and discussion around direct transfers of extractives revenue

Over the past several years, proposals to provide individual direct transfers of natural resource revenue have become more common. Proponents of oil to cash approaches hold that direct transfers can help prevent the negative effects of the resource curse and significantly improve the social contract, generating more accountability of governments to their citizens.

This type of policy was enacted in places like Alaska and Mongolia with some success in reducing poverty, but volatile mineral prices created challenges in both contexts.

Take Alaska. Since 1982, Alaska has deposited 25% of its mineral royalties into the Alaska Permanent Fund, where it invests the money into stocks and bonds. The interest from this is called the Permanent Fund Dividend (PFD), and is directly distributed to state residents each year according to a pre-set formula. According to a 2016 University of Alaska study, the PFD was found to have reduced poverty in Alaska by nearly 20%. While the system was a success for many years, it became an issue in 2015 when oil prices fell — the government didn’t have enough funds for both the PFD and the state’s budget. Since then, the dividend has been set manually by lawmakers, becoming a major controversy in the 2018 election and ongoing budget negotiations.

Mongolia provides another case study. In 2006, Mongolia introduced the Windfall Profits Tax Law, increasing the government’s share of mining profits. Revenue from this tax helped fund the Child Money Program, which provided monthly payments to every child in Mongolia. In 2010, following a period of high GDP growth, the government established the Human Development Fund to replace the Child Money Program and instead provided universal cash transfers to all citizens. However, thanks to slow growth the debt situation in Mongolia worsened. After the 2012 elections, the government reverted to the original program. While the program did reduce poverty, the instability of mining revenue complicated its sustainability. Since then, the popularity of direct transfers has decreased in public polls, with more citizens in favor of “long term social development” rather than direct transfers.

Fujimori’s proposal of direct transfers sought to overcome the lack of government effectiveness and corruption around the use of mining revenue. According to her campaign, the size of the transfer would be larger if mining companies were more profitable, incentivizing support for mining activity and reducing conflict.

Yet, on the June 6th runoff election, Castillo won again in almost every single mining region in the country, getting between 60-90% of valid votes in each and propelling him to victory. See the election map below and related article by Reuters.

What happened?  While an in-depth analysis is in order, most analysts point out to two major factors for Castillo’s win: 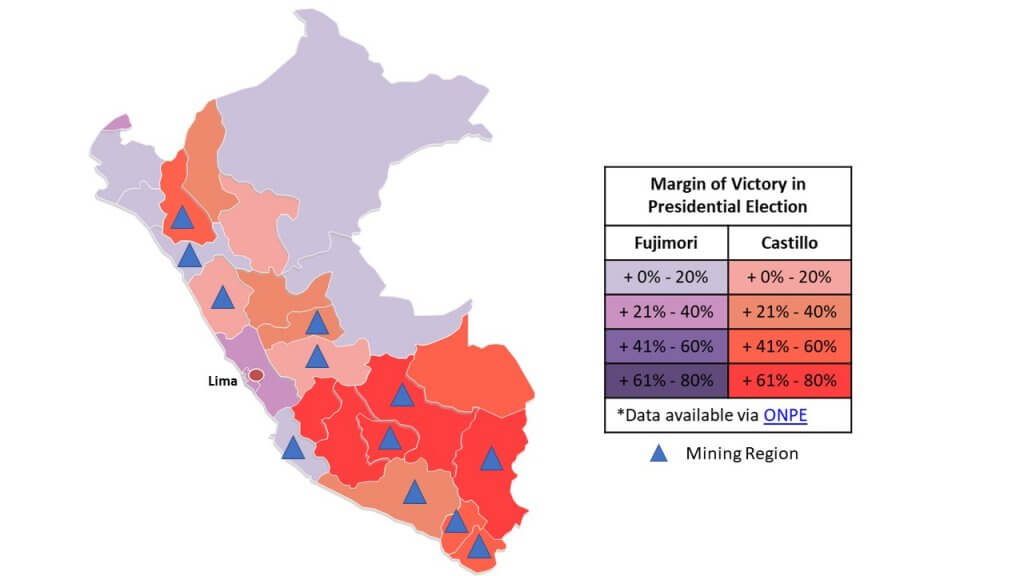 …these proposals circumvent the government effectiveness and corruption challenges they use as justification.”

Shortcomings in both approaches

There are at least two major problems with both Castillo and Fujimori’s proposals. To begin with, they are backed by weak references to other countries’ programs rather than a strong use of evidence and efforts to learn from past experiences. Even in the case of Alaska and Mongolia, the instability of mining revenue raised difficult challenges. In Peru, these various proposals were aimed at a short-term tactic for votes, not based on a thorough global analysis or national conversation.

Second, and even more importantly, these proposals circumvent the government effectiveness and corruption challenges they use as justification. Castillo’s tax and nationalization plans indicates that the issue primarily lies with the size of the mining revenue, rather than the use of these resources by subnational governments. It also seeks to transfer management of multimillion-dollar mining operations to the same regional governments struggling to spend current revenue allocations and under scrutiny for mismanagement.

Fujimori proposed to transfer 40% of the mining revenue via direct transfer, as that is the average not spent by subnational governments in recent years. However, there is no attempt to understand why the lack of execution occurs or how to resolve it. This article by NRGI Latin America provides a thorough discussion of this.

Dealing with existing challenges with a multi-pronged approach

Improving the distribution and use of mining revenue will require a strategy that involves cooperation between different levels of government, the mining companies in each area, and civil society.

Key entry points on how to build such a strategy have already been identified through local efforts. On a macro level, the 2020 report of the Commission for Sustainable Mining Development proposes concrete steps for regulation, public administration, and public policy that would support an enhanced management of mining revenue and trust between the different stakeholders. Proposals included recommendations on increased coordination between ministries and governments, enhanced transparency efforts, and initiatives to foster integrity and prevent corruption.

Additionally, and specifically on the impact of mining revenue on different dimensions, a recent report by Grupo Propuesta Ciudadana underscores six lines of action for public policy.

A shared value approach has also been explored by experts like Miguel Inchaustegui, former Minister of Energy and Mines, to provide direct technical assistance to overcome governance challenges of subnational governments.

And finally, there is progress in introducing subnational approaches into local visions to address the challenges of mining activity. The recently completed Rimay process in Moquegua is an example of this, bringing together government, industry, and civil society actors.

There is no shortage of ideas on how to tackle the challenges around mining revenue in Peru. Other proposed solutions include a combination of 1) reviewing the mining revenue distribution formula 2) reducing the annual allocation for regions 3) introducing a mining sovereign fund and 4) directing a small amount to direct transfers, hopefully reducing volatility and inequalities in the distribution. One such proposal, by former Vice-minister Ricardo Labo, can be found here. If plans like these consider the lessons from similar experiences elsewhere, they certainly hold promise.

After inauguration on July 28, the new president will have many options to consider when it comes to the management of mining revenue. It is up to the new administration to seriously consider them, rather than rushing to pre-conceived ideas and campaign promises that do not address the challenges the current system faces.

Based on a number of consultations with local stakeholders, the Leveraging Transparency to Reduce Corruption (LTRC) project will promote stakeholder engagement and the pursuit of solutions in the management of mining revenue at Peru’s subnational level. LTRC is a joint initiative of R4D’s Accountability and Citizen Engagement (ACE) practice and the Brookings Institution’s Governance program. Consistent with our TAP-Plus approach, we support local actors in building systems and coalitions for change.

Our next piece on Peru will focus on our plans for a community of learning and social lab that will take forward several of the recommendations from subnational Rimay processes, as well as a consideration of many of the ideas described above, while building trust between different stakeholders. Stay tuned.