In Benin, health insurance is the main component of the package of four social protection services (health insurance, vocational training, micro-credit, and retirement insurance) of the Insurance project for the enhancement of human capital. The pilot phase of this initiative, in which services are addressed to the “extreme poor,” started in July 2019 in three districts or health zones (HZ). Since then, the Government of Benin and its partners have been working to implement this experiment, and to adjust the strategies put in place through continuous learning.

In this post, we highlight the lessons learned during the first learning cycle about the health insurance communication plan.

The effective implementation of social policies requires specific communication, not only toward the various stakeholders so that each can identify their roles, rights, and duties, but also and above all towards the beneficiaries so that they understand the package of services provided and put it to good use. Moreover, communication was one of the priorities identified during the initial consultations around Benin’s health insurance scheme known as AM-ARCH and one of the themes of the pilot phase’s learning plan.

As soon as the AM-ARCH project was launched, unstructured communication to beneficiaries started through health workers and social workers. But the stakeholders in the political dialogue around AM-ARCH insisted on the need to have a well-crafted communication plan with clear messages to reach the different targets (beneficiaries, health care providers and social providers, authorities administrative, and ARCH’s focal points).

This communication plan was therefore developed under the aegis of the Agence Nationale de la Protection Sociale – Assurance Pour le Renforcement du Capital Humain (ANPS-ARCH), with the support of a consultancy firm and the technical assistance of the African Collaborative for Health Financing Solutions (ACS) project. The communication plan emphasized the involvement of census actors (field workers used to identify the extreme poor, AM-ARCH beneficiaries) to carry out door-to-door awareness-raising in local languages through the city or village districts of the three pilot health zones.

In addition, there is the organization of awareness sessions by health and/or social promotion providers. The implementation of the plan began in June 2020, with a month-long active implementation phase conducted by the consultancy firm.

A well-established learning process for monitoring and continuous adaptation

Following the recommendations of the consultation framework around AM-ARCH, the ANPS-ARCH embarked on a continuous learning process through a periodic evaluation of the effectiveness of the chosen communication approaches and methods. This allowed the necessary adjustments to be made over time to improve the implementation, and thus consolidate the preparation for the AM-ARCH scaling up phase. This approach also made it possible to draw lessons for contexts similar to the one in Benin. ACS supported ANPS-ARCH in this learning effort. 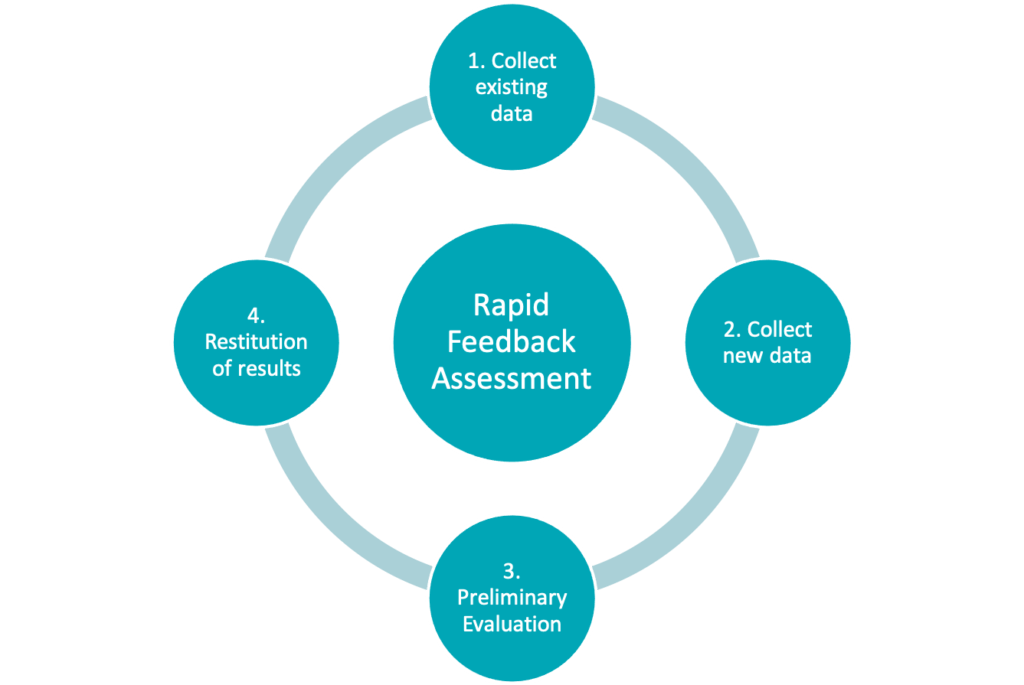 In our specific case, the first cycle of this evaluation was carried out from August to September 2020, three months after the start of the implementation of the communication plan. The data used are mainly routine data from the AM-ARCH pilot phase, those resulting from the systematic documentation of the ACS project activities, and finally, the data collected directly from stakeholders and beneficiaries. The latter is extracted from 12 semi-structured interviews per health zone (36 interviews in total for the 3 HZ) and a rapid survey with a random sample of 5% of AM-ARCH beneficiaries and with the active population in markets and other gathering places (i.e. 113 people in total).

Need to ensure the effectiveness of communication channels

Three months after the implementation of the communication plan started, nearly 80% of the people surveyed were aware of the existence of AM-ARCH as an initiative providing free access to care for RAVIP cardholders (biometric card providing access to ARCH services). However, only half of those interviewed in the general population (and among the beneficiaries) had heard messages or seen images or messages about AM-ARCH during that time.

Our team was concerned that the channels used (which are conventional channels: national television, main radio channels in large cities, large advertising posters in large cities) were not completely efficient. Advertising posters in health centers (66.1%), local radios (59.7%), and television (38.7%) were the main channels through which respondents declared having been exposed to the AM-ARCH messages. The “extreme poor” beneficiaries of the program could quickly be excluded from media such as television or radio.

For posters and billboards, illiteracy could have been a reason beneficiaries did not understand the messages conveyed. In addition, the billboards are often placed along major roads and are insufficiently deployed within city and village neighborhoods where the vast majority of the targeted population lives.

Furthermore, the large difference between the proportion of people exposed to messages (around 50%) and the proportion of people aware of the existence of AM-ARCH (80%) suggests that informal communication activities that existed before the communication plan and the general communication around the ARCH project within the framework of the government action program also played a role. — including, most notably, the awareness campaigns carried out by health workers.

Limited understanding of the messages conveyed

Regarding the understanding of AM-ARCH, nearly 90% of beneficiaries that were interviewed and the general population still had the misconception that AM-ARCH provides unlimited access to care. This led to frustrations during contacts with health centers when beneficiaries had to pay for services not foreseen in the AM-ARCH health care package.

The high proportion of people (90%) with a misunderstanding of the health care package raises questions about the content of the messages or the understanding of the content of the messages. The elaborate messages may not be specific enough or do not cover in detail the free services. In addition, radio and television broadcasts are not interactive to allow stakeholders to ask questions for clarification.

The necessary adaptations to the strategies in place

This assessment suggests three key adaptations for the rest of the process. 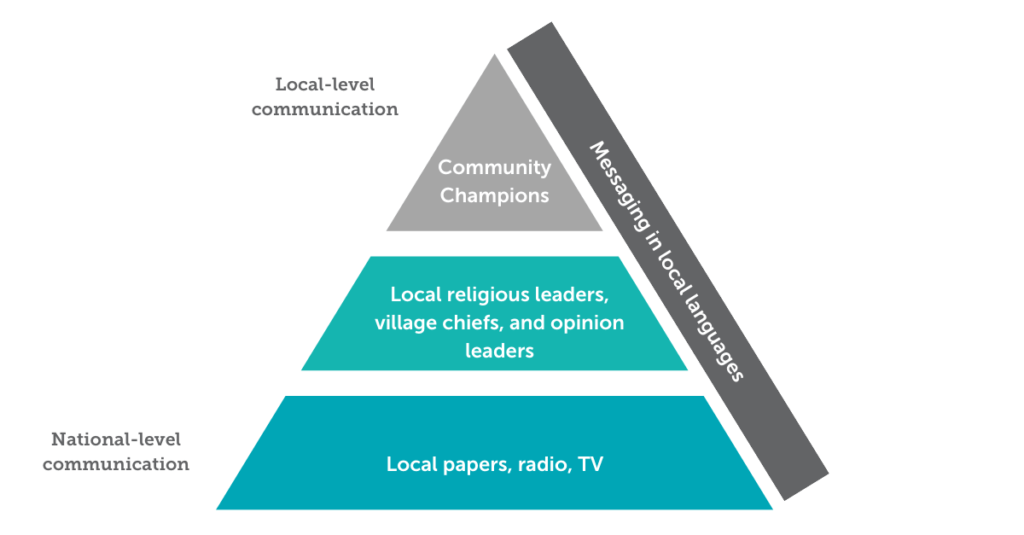 From findings to actions

In the coming months, ACS will support the ANPS to develop innovative approaches to communicate effectively with beneficiaries. Community communication actions carried out in the local language and with the support of religious leaders, village chiefs and opinion leaders could be more efficient in reaching the beneficiaries, especially the ones with no radio or television. These actions, coupled with ACS’s Voices Inspiring Change initiative, could also allow them to express themselves and thus strengthen social accountability by ensuring that their views are integrated into the AM-ARCH implementation. Community champions identified within the beneficiary population could also support communication around AM-ARCH.

Additionally, following the delivery of the evaluation results with rapid information feedback to the members of the AM-ARCH consultation framework, the stakeholders recommended the development of message boxes in local languages ​​to be made available to the various implementing actors and proposed to reserve time slots on radio and TV to continue raising awareness about AM-ARCH.

In conclusion, the rapid information feedback assessment of the AM-ARCH’s communication plan has generated — within just three months of implementation — important learnings that greatly helps the ANPS-ARCH and its partners improve the plan for more efficiency. The next rounds of evaluation will refine these learnings and generate solid evidence to guide the scaling up of AM-ARCH and the implementation of similar interventions in Africa. ACS is resolutely committed to supporting the Beninese authorities in this process.